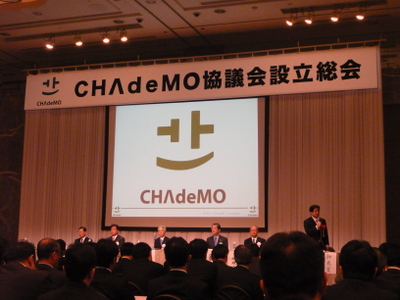 On 15th March, Establishment General Meeting for “CHAdeMO conference” was held at Cerulean Tower Tokyu Hotel, and our Representative Keiko Yokoi who devised the name (CHAdeMO) was invited to its conference as a guest.

Name of “CHAdeMO” means “CHArge de MOve = Move by charging” and “CHARGE DENKI (=Electricity) MOVE”. And to explain “Rapidity”, we crossed “CHAdeMO” and Japanese “oCHA deMO nondeiru aidani juden dekiru = It can be charged during drinking tea)”, and made it congenial to the people.

Keiko Yokoi attended the conference as the guest, who is inventor of the name “CHAdeMO”